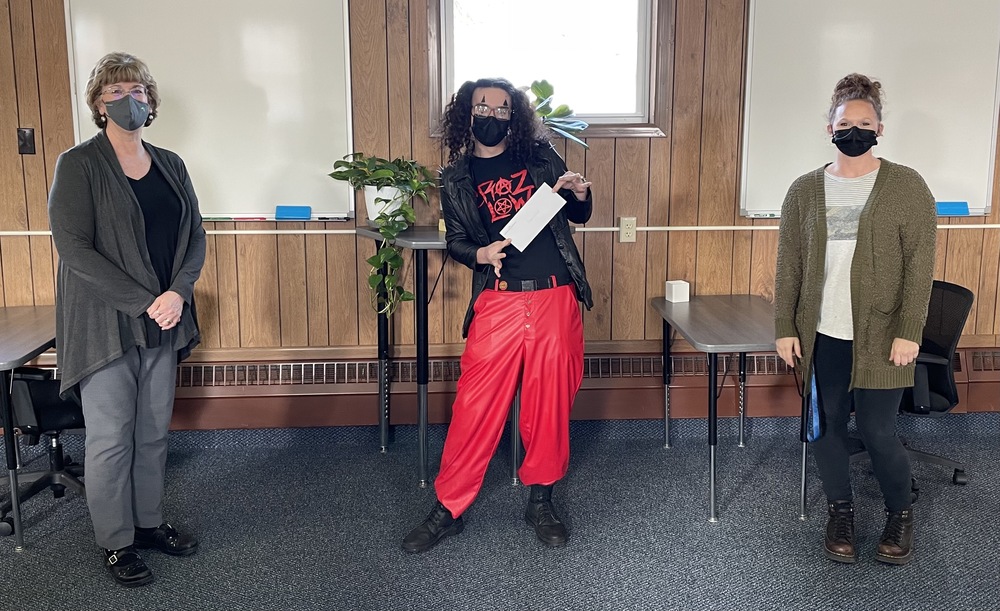 November Student of the Month

Dylan Lehigh of Paxton has been named student of the month for November at Paxton-Buckley-Loda High School.  Dylan is the son of Kayla Nederveld.  He was nominated for the award by his teacher, Margo Elson.

Mrs. Elson nominated Dylan because of his motivation and personality.  She stated that, “Dylan’s motivation and personality have made him into one of PBL’s finest.  Mrs. Elson said, “If we go back 16 months to when I met Mr. Lehigh, I can remember countless conversations on how Dylan wanted to pursue his academics in a way that would set him up for success.  He was very focused on his future but did not have a clear idea of what he needed to accomplish in order to get there.  Fast forward 16 months and now Dylan and I are talking about classes he wants to take at Parkland.  Dylan has moved his academics to his number one priority in his life, and all of his peers have seen the momentous change.  His academic success has even caused his peers to take their academics seriously.  He has not only made changes in his own life to see success but has caused positive changes with others.”

Mrs. Elson also said, “Dylan’s character is one of a kind.  This young man was not dealt the best cards in life, but you would never know it.  He is one of those people who completely understands the saying, “when life gives you lemons make lemonade”.  Another quality of Dylan’s that melts my heart is his love for his mother.  He lights up any time we speak of her and her recent accomplishments.  Dylan always wants to point out the success of others.  He wants to celebrate his friends, classmates, and mother before giving himself any credit; he is such a humble human being.  I could write pages upon pages regarding Mr. Lehigh’s character.  He is a respectful, caring, sweet-hearted young man.”

“Another one of Dylan’s attributes that I admire is his work ethic not only in the classroom but in the workforce as well.  Dylan is able to balance his academics and two jobs.  He is determined to make a better life for himself and his mother, and he takes that responsibility very seriously.  Dylan is such a modest and humble young man that he would never label himself as a leader, but I would most certainly label him as one of my most influential student leaders.  His words are always heard.  He may be a man of few words, but when he speaks everyone is sure to listen.  Recently, some of his peers made comments of how they need to “get focused like Dylan” stated Mrs. Elson.

In summary, Mrs. Elson indicated that Mr. Lehigh made a huge impact on his peers and teaching staff.  She said, “Dylan is going to do big things with his future due to his motivation, dedication, accountability, and personality.  This young man is a true asset to the Paxton community and I am so proud to be called “Dylan’s teacher!”

The student of the month award is sponsored by the Farmers-Merchants Bank of Illinois.  The award recognizes PBL High School students who demonstrate the school district’s mission of “Excellence through rigor, relevance, and relationships.”  Teachers nominate students and the winner receives $50 and the other nominees receive a $5 Just Hamburgers gift certificate.  The other students that were nominated are Lauren Sawyer, Rachel Haile, and Kylie Cook.   Congratulations to all of the nominees and our winner, Dylan Lehigh!